From E-fileWiki
Jump to: navigation, search

Adobe Flash is going away in 2020; better, support for Adobe Flash ends in 2020. Adobe won't support Flash anymore, and all major browser makers revealed plans to retire Flash in their browsers.

While that means that most browsers won't support Flash content anymore and that there won't be any more updates for Flash, it does not really mean that all Flash content on the Internet is suddenly going away.

Google targets Chrome 87 as the target release for Flash removal in the web browser. While there is still a good 18 month until that deadline, things are going to get more annoying soon in regards to Flash.

More annoying, because Google tightened the Flash use screws already in Chrome 69. The browser, released in August 2018, changed the Flash permissions system from a permanent state to a session-only state.

Starting in Chrome 76, out July 2019, Flash is set to block by default. Chrome will still support Flash at this point, and it is even possible to switch the Flash setting to Ask First again, but that leads to a new problem for users who have set Flash to Ask First: Chrome displays a Flash deprecation warning on start if Ask First is set.
The message states "Flash Player will no longer be supported after December 2020". The learn more link leads to the "Saying goodbye to Flash in Chrome" post from 2017.

The notification may display for a while or just flash for a brief moment. Considering that this is being tested in Chrome Canary currently, it seems likely that Google is still testing the new notification and system before it reaches the stable channel.

There is no option to disable the notification in Chrome (other than blocking Flash).

To summarize: starting with Chrome 76, Flash is blocked by default. Users may still enable Flash by loading chrome://settings/content/flash and setting the technology to Ask First.

Any site permission given during a session is not saved anymore if it is a Flash permission, and it is discarded when the browser is closed.
You may run Flash content then in different ways, e.g. by clicking on the "click to play" area of the Flash element to display a "site wants to Run Flash" prompt which you need to allow, or by adding the site to the allow list for Flash (which Chrome will remove when you close the browser). 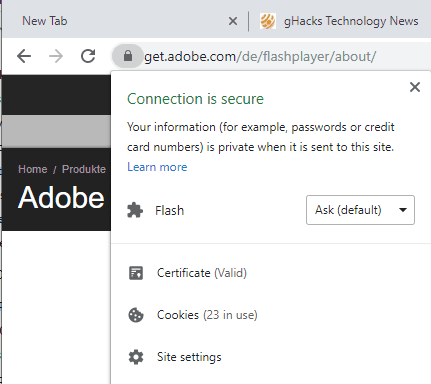 Note: Some video download extensions may not work properly anymore in Chrome until you enable Flash.

Google is not the only company that is making Flash use more annoying. Mozilla disabled Flash in Firefox 69 by default for users who still have it installed on their systems. Firefox does not include a native Flash solution like Chrome.

Now You: do you (still) use Flash content? (via Techdows)

Then you need to unzip it : we suggest to use a local drive (i.e. My Documents)

Then you can run the Executable file (.exe) or double clik the Start.bat file in order to reach directly the e-File login page 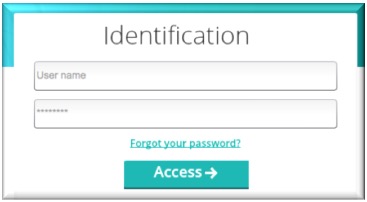 Alternative solution on the client side

Companies can manage the use of Flash via the following politics : « DefaultPluginsSetting », « PluginsAllowedForUrls » and « PluginsBlockedForUrls »

Those fonctionalities are decribed on the below article :